A year ago, in July 2014, Greenwich’s Zoning Board of Appeals denied GRS application to build a house of worship.  Following the denial, GRS filed a federal lawsuit alleging that Greenwich violated its civil rights by discriminating against their proposed plan. They invoked a law known as “RLUIPA,” which stands for the Religious Land Use and Institutionalized Persons Act of 2000. . . . The new GRS house of worship will be the second purpose-built synagogue in the Greenwich’s 375-year history.

"Greenwich Reform Synagogue vs Cos Cob Neighbors: It’s All Over But the Shouting," Greenwich Free Press (July 11, 2015)

The United States District Court for the District of Connecticut today confirmed the Settlement Agreement between the Greenwich Reform Synagogue, the Town of Greenwich and its Planning and Zoning Board of Appeals. The settlement commits the Board of Appeals to issue a Special Exception for the construction of the planned Synagogue within ten days, and other Town land use agencies to promptly act on the other permits required.

The settlement is welcomed by the Greenwich Reform Synagogue, which has been without a home for about two years.  The Synagogue’s plan had met stubborn opposition from numerous residents and neighbors, seven of whom intervened in the RLUIPA suit and opposed the settlement.

The agreement would bring an end to the synagogue’s suit against the town and also seemingly clear a major hurdle toward building the synagogue on Orchard Street, which has raised the ire of neighbors who say they don’t want the development inside an otherwise residential neighborhood.

This lawsuit from the Zoning Board of Appeals (ZBA) denying a special exception that the Greenwich Reform Synagogue was seeking for its plan to build a new synagogue on Orchard Street by a two to two margin with one abstention. That spurred the synagogue to file suit against the town in the United States District Court for Connecticut, citing the Religious Land Use and Institutionalized Persons Act and claiming they had been unfairly discriminated against. As part of its suit, the synagogue said that the ZBA had approved churches in several residential neighborhoods throughout town. 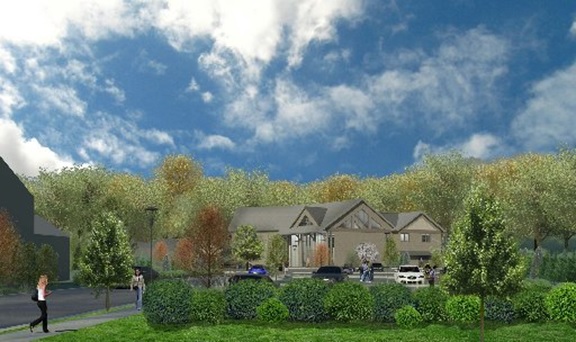 In two separate votes today, the Greenwich Zoning Board of Appeals and Board of Selectmen voted to approve a settlement agreement allowing the Greenwich Reform Synagogue to move forward with development of its property as a house of worship, concluding a lawsuit filed on behalf of the Synagogue by S&G and the Greenwich law firm of Heagney, Lennon, Slane LLP on July 7, 2014.  “We are pleased that this matter was quickly resolved by negotiation with the Town and the ZBA, especially as this comes on the eve of Yom Kippur. This agreement will remove the obstacles to building a new home for this congregation that has been without a place of worship for years,” said Robert L. Greene, attorney for the Synagogue.  “The hard work and cooperation of all parties made this possible.”  The Greenwich Zoning Board of Appeals had previously denied a Special Exception on June 11, 2014.  This is the second major RLUIPA settlement in Connecticut in recent weeks.

Greenwich Reform Synagogue, a Reform Jewish Congregation serving the Greenwich, Connecticut community for over 35 years, filed its federal lawsuit against the Town of Greenwich and the Town of Greenwich Planning and Zoning Board of Appeals on July 7, 2014. The suit charged that the Zoning Board of Appeals’ outright denial of zoning approval for its approximately 12,000 square foot planned synagogue facility violates the United States Constitution’s guarantees of free exercise of religion and equal protection of the law, as well as the federal Religious Land Use and Institutionalized Persons Act (“RLUIPA”), the Connecticut Religious Freedom Act and Connecticut zoning law.

The Synagogue’s building plans had already been approved unanimously by the Inland Wetland and Watercourses Agency (“IWWAA”) and preliminarily approved by the Planning & Zoning Commission, also unanimously. However, the Zoning Board of Appeals deadlocked and refused to approve construction of a house of worship in the Cos Cob neighborhood of Greenwich, even though approximately 30 of the 35 houses of worship in Greenwich are located in such residential zoning districts.  The ZBA had previously approved similar projects for other religious groups, and the Greenwich zoning code specifically permits houses of worship in residential districts.

The Synagogue’s plan meets all the zoning requirements for height, setbacks, area coverage and green areas, and provided numerous additional accommodations to neighbors that exceeded legal requirements.  Those accommodations included landscaped screening and buffering to prevent visual impacts and ensure the privacy of neighbors.  Additionally, after multiple traffic studies, the Planning and Zoning Commission had preliminarily found that traffic in the neighborhood would not be materially affected.

The planned house of worship will be only the second purpose-built synagogue in Greenwich’s 374-year history.  The Synagogue will announce the settlement at its Yom Kippur services and aims to break ground in 2015.

12/01/2015: Synagogue will be the second purpose-built synagogue in Greenwich, Connecticut's 375-year history

A settlement was recently reached after three years of expensive and divisive wrangling. It started in 2012, when a group of neighbors learned that an institution purchased several small residential properties in Cos Cob and formed Cos Cob Families Fighting for Residential Rights (CCFFRR) to oppose construction of a 12,000 sq ft house of worship. . . . Over the course of three years, CCFFRR incurred nearly $100,000 in legal and expert fees.

Following the [2014] denial, GRS filed a federal lawsuit alleging that Greenwich violated its civil rights by discriminating against their proposed plan. They invoked a law known as “RLUIPA,” which stands for the Religious Land Use and Institutionalized Persons Act of 2000.  RLUIPA protects religious assemblies and institutions from zoning and historic landmark laws that substantially interfere with the assemblies’ and institutions’ religious exercise.

The new GRS house of worship will be the second purpose-built synagogue in the Greenwich’s 375-year history.

Last December, after the P&Z gave its green light, Marc Abrams, Co-President of the Board of GRS stated in a release, “We went to great lengths to listen to everyone’s point of view and to address the concerns our neighbors had. Every reasonable request was included in the final site plan, and the result will be a modest and attractive building that will fit well with the neighborhood.”

"Greenwich Reform Synagogue vs Cos Cob Neighbors: It's All Over But the Shouting," Greenwich Free Press